Mountain Lion has a little known dictation feature built right in – much like Siri on the iPhone. It is extremely helpful and very easy to use. If you still have an older operating system, why not upgrade to Mountain Lion?

SUMMARY: To use mac built in dictation, open any application that has a text input area and position your cursor in that text area. Press the Shortcut key twice (by default, it’s the Function key). Speak your piece and when you are finished hit the Function key again or click “Done.” It’s as simple as that!

Just as with Siri on iOS, any time you use the Dictation feature, your recorded voice will be sent to Apple’s servers in order to convert what you say into text. So an Internet connection is necessary.

Dictation includes many voice “shortcuts” that allow you to manipulate the text and insert symbols while you are speaking. Here’s a list of the more important shortcuts:

You can enable the new Dictation feature in Mountain Lion by navigating to System Preferences > Dictation & Speech > Dictation. Select the “On” radio button. 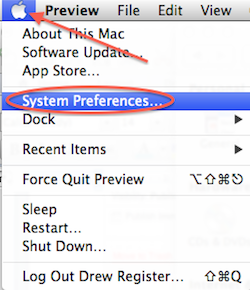 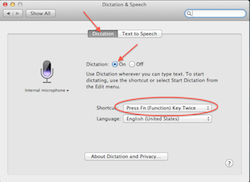 If you like reading about tech, you should check out our blog! We post regularly about common fixes, interesting gadgets and time-saving shortcuts.

If you can't quite find what your looking for, try searching our entire site with the search box below or feel free to give us a call - we are happy to help!